There is just something about cozying up with a good thriller during the fall and winter months when you can sit under a soft blanket and get lost it in. I compiled a list of 9 thrillers for the fall that I have read and loved that have more of a fall or winter setting. Nothing like a a few mysteries to get you in the mood for fall, right?! 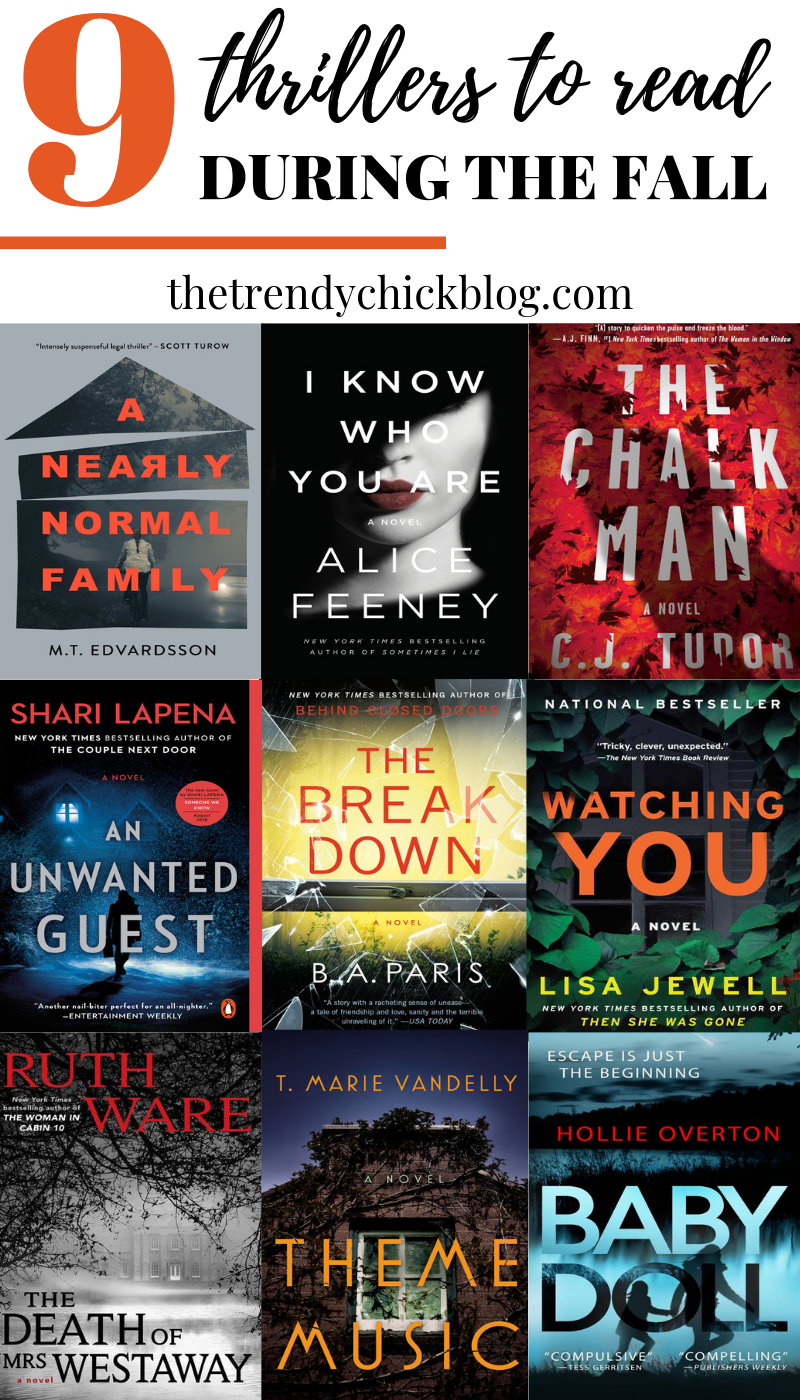 The following are in the order they are shown on the image above, but it isn’t necessarily the order I would recommend them in. I have included a short summary of each book underneath so you can see if it interests you, and if I have reviewed it in a previous book post, I will link to that as well!

“Eighteen-year-old Stella Sandell stands accused of the brutal murder of a man almost fifteen years her senior. She is an ordinary teenager from an upstanding local family. What reason could she have to know a shady businessman, let alone to kill him?

Stella’s father, a pastor, and mother, a criminal defense attorney, find their moral compasses tested as they defend their daughter, while struggling to understand why she is a suspect. Told in an unusual three-part structure, A Nearly Normal Family asks the questions: How well do you know your own children? How far would you go to protect them?”

“Meet Aimee Sinclair: the actress everyone thinks they know but can’t remember where from.

When Aimee comes home and discovers her husband is missing, she doesn’t seem to know what to do or how to act. The police think she’s hiding something and they’re right, she is—but perhaps not what they thought. Aimee has a secret she’s never shared, and yet, she suspects that someone knows. As she struggles to keep her career and sanity intact, her past comes back to haunt her in ways more dangerous than she could have ever imagined.”

“In 1986, Eddie and his friends are on the verge of adolescence, spending their days biking in search of adventure. The chalk men are their secret code, stick figures they draw for one another as hidden messages. But one morning the friends find a chalk man leading them to the woods. They follow the message, only to find the dead body of a teenage girl.

In 2016, Eddie is nursing a drinking problem and trying to forget his past, until one day he gets a letter containing a chalk man—the same one he and his friends saw when they found the body. Soon he learns that all his old friends received the same note. When one of them is killed, Eddie realizes that saving himself means figuring out what happened all those years ago. But digging into the past proves more dangerous than he could have known. Because in this town, everyone has secrets, no one is innocent, and some will do anything to bury the truth.”

See my thoughts on The Chalk Man here!

Also can we just pause for a minute and talk about how that cover makes it the perfect thriller for the fall?!

“It’s winter in the Catskills and Mitchell’s Inn, nestled deep in the woods, is the perfect setting for a relaxing—maybe even romantic—weekend away. It boasts spacious old rooms with huge woodburning fireplaces, a well-stocked wine cellar, and opportunities for cross-country skiing, snowshoeing, or just curling up with a good murder mystery.
So when the weather takes a turn for the worse, and a blizzard cuts off the electricity—and all contact with the outside world—the guests settle in and try to make the best of it.
Soon, though, one of the guests turns up dead—it looks like an accident. But when a second guest dies, they start to panic.
Within the snowed-in paradise, something—or someone—is picking off the guests one by one. And there’s nothing they can do but hunker down and hope they can survive the storm. . . and one another.”

“Cass is having a hard time since the night she saw the car in the woods. It was on the winding rural road, in the middle of a downpour, and a woman was sitting inside—the woman who was killed. She’s been trying to put the crime out of her mind; what could she have done, really? It’s a dangerous road to be on in the middle of a storm, and she probably would have been hurt herself if she’d stopped. Not only that, her husband would be furious if he knew she’d broken her promise not to take that shortcut home.

But since then, she’s been forgetting every little thing. Where she left the car; if she took her pills; even the alarm code.

The only thing she can’t forget is that woman, the woman she might have saved, and the terrible nagging guilt.

And the silent calls she’s receiving, or the feeling that someone’s watching her…”

As the headmaster credited with turning around the local school, Tom Fitzwilliam is beloved by one and all—including Joey Mullen, his new neighbor, who quickly develops an intense infatuation with this thoroughly charming yet unavailable man. Joey thinks her crush is a secret, but Tom’s teenaged son Freddie—a prodigy with aspirations of becoming a spy for MI5—excels in observing people and has witnessed Joey behaving strangely around his father.

One of Tom’s students, Jenna Tripp, also lives on the same street, and she’s not convinced her teacher is as squeaky clean as he seems. For one thing, he has taken a particular liking to her best friend and fellow classmate, and Jenna’s mother—whose mental health has admittedly been deteriorating in recent years—is convinced that Mr. Fitzwilliam is stalking her.

7. The Death of Mrs. Westaway

“On a day that begins like any other, Hal receives a mysterious letter bequeathing her a substantial inheritance. She realizes very quickly that the letter was sent to the wrong person—but also that the cold-reading skills she’s honed as a tarot card reader might help her claim the money.

Soon, Hal finds herself at the funeral of the deceased…where it dawns on her that there is something very, very wrong about this strange situation and the inheritance at the center of it.”

See my thoughts on this spooky thriller for the fall here!

“For the lucky among us, life is what you make of it, but for Dixie Wheeler, the theme music for her story was chosen by another long ago, on the day her father butchered her mother and brothers and then slashed a knife across his own throat. Only one-year-old Dixie was left alive, infamously known as Baby Blue for the song left playing in the aftermath of the slaughter.

Twenty-five years later, Dixie is still desperate for a connection to the family she can’t remember, so when her childhood home goes up for sale, Dixie sets aside all reason and moves in, re-creating a macabre decor with her family’s salvaged furniture. But as the ghosts of her family seemingly begin to take up residence in the home that was once theirs, Dixie starts to question her own sanity and wonders if the evil force menacing her is that of her father, or a demon of her own making.

In order to make sense of her present, Dixie becomes determined to unravel the truth of her past and seeks out the detective who originally investigated the murders. But the more she learns, the more she opens up the uncomfortable possibility that the sins of her father may belong to another, and, perhaps most tragically, to Dixie herself. As bodies begin to pile up around her, Dixie must find a way to expose the lunacy behind her family’s massacre and redeem what little remains of her soul.”

“You’ve been held captive in one room.

You’ve been mentally and physically abused every day since you were sixteen years old.

Then one night you realize your captor has left the door to your cell unlocked.

For the first time in eight years you’re free. This is what happens next…
Escape was just the beginning.”

Are there a thriller for the fall that you loved that I missed on my list? Let me know in the comments because I am always in need of new recommendations!