From June 11 to June 18, I decided to take a week off from Snapchat, Instagram, Facebook, and Twitter. For a normal 21 year old, this would be a challenge, but it was especially challenging since I am a blogger and part of that includes posting often on Twitter and Instagram and keeping up with the blogging world. 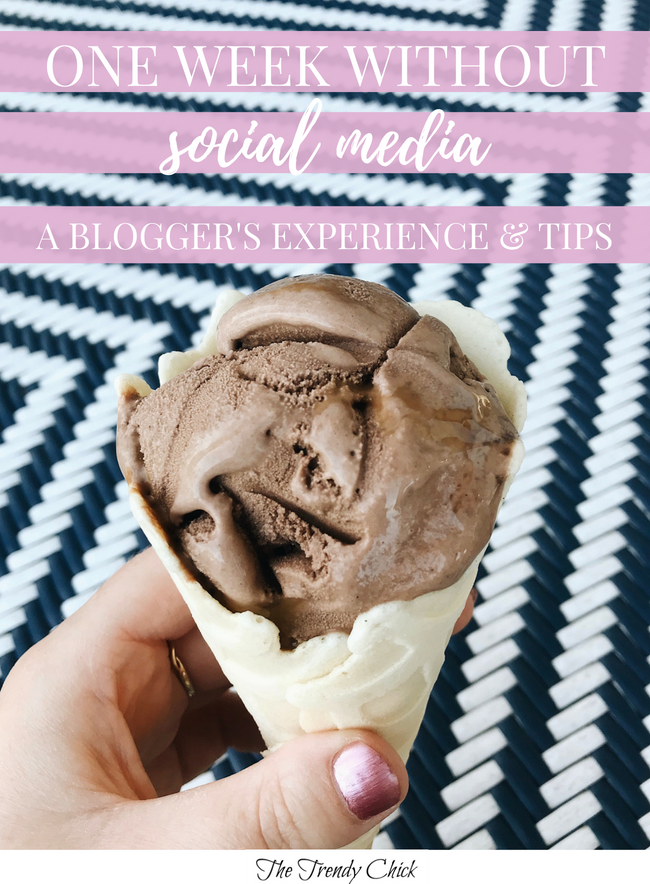 I initially wanted to take a week off to challenge myself, give myself a break, and because it was on my 101 in 1001 list. Often a find myself mindlessly clicking into some social media app just because I am bored while I wait somewhere or just because I am too lazy to get up and do something else.

I told multiple friends about this to help keep me accountable, and I was met with the same response more than once: “That’s awesome, but I could never do that because I would be too bored at work.”

Believe me, I understand. We are all college students working summer jobs that are often not too exciting. I had even tried to use that excuse with myself before, and thought maybe I should wait until the school year when I am in class or busy more often. But ultimately I went through with it, and besides the first day, I truly didn’t miss it at all. To be honest, I was hesitant to even go back to it after the week was up, and if it wasn’t for my blog I might consider deleting them all together. But to be honest, I enjoy sharing pictures on Instagram and seeing what my friends are up to these days. Personally I had just gotten into the habit of checking in WAY too often, and mindlessly scrolling.

I also had recently downloaded the app Moment, which tracks how much screen time you have every day. To be honest, most days before the challenge I had 3-4 hours by the end of the day. While some people might not think that was too bad, because it does include texting, watching videos, email, social media, etc., it still was more than I wanted to be spending.

During the challenge I spent around 1 hour and 45 minutes on my phone every day, with the highest day being 2 hours and 15 minutes, and the lowest being 34 minutes! If you had asked me before the challenge if I could have my phone with me almost all day, yet only be on it for 34 minutes I would not have believed you!

One big tip I have for anyone who wants to try this is to move your social media apps to a different page on your phone. I put all mine into a folder and moved it to my last page, so it would have taken quite a bit of effort to get into it. The first day, I will admit I tried to click where they used to be multiple times because it was just so mindless to do when I was bored. You can even take this one step farther and delete them from your phone overall, so you have to redownload them to access your accounts.

Another tip is to find alternatives to do when you are bored. For me, this was bringing a book everywhere, having multiple podcasts downloaded, and utilizing Duolingo if I was out and bored because it would at least be productive. I read 3 books that week, listened to multiple podcasts, and kept up with Duolingo every day!

Finally, make lots of plans that week to keep yourself occupied! I nanny during the day, so I brought a book with me every day so I could read that while the kids were napping or watching a movie so I wasn’t tempted to go on social media. I also planned a sleepover, a photoshoot, a trip to a new gelato place, a trip to a shaved ice place, and so much more during my week off! It was a lot more fun spending time with friends and exploring new places instead of sitting and scrolling through the explore page on Instagram.

I highly recommend taking even just a weekend off from social media! Like I said, being on social media is completely fine and even fun, but sometimes when you are on it too much it can become toxic, especially if you are just following other people’s lives and not living your own.

Let me know in the comments if you have ever taken a social media break before or if you are going to take one soon!