You might have seen me tweet about how I got $8 jeans at the Macy’s at Mall of America. I happened to find them in my size and they were on clearance. And I got an extra 20% off at check out, so they ended up being $8. Then the next day I was at the Macy’s in downtown Minneapolis where I managed to score another pair for the same price, but this time they were not supposed to be $8. But I want to share the story and another story from a few weeks ago to inspire you to speak up and don’t let other people run you over. 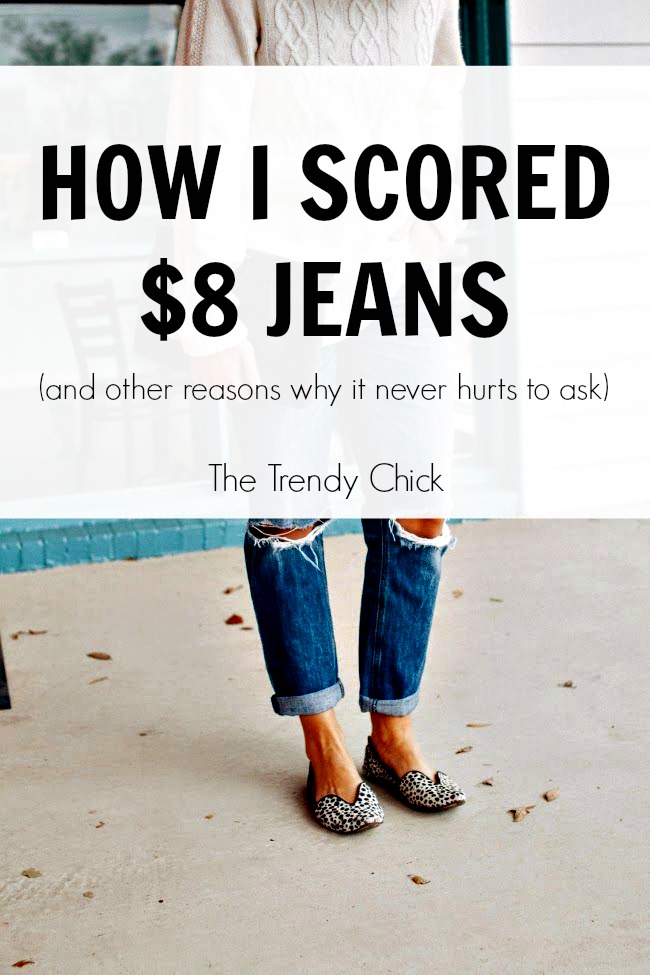 First off the story of how I got the second pair of jeans for $8. I was shopping around and tried on multiple pairs of jeans including a pair from a rack that had $9.99 on a sign. Obviously that is a great deal, especially with the extra 20% off, so I when that pair was the only one that fit I was thrilled! Yet when we went to checkout, the cashier said they were $35. And that is quite a bit more than the $10 I was expecting to pay. So we explained that they were on the $9.99 rack and said a customer probably put them there by mistake. However, I argued back that there were about 20 pairs there and I doubt a customer would have put so many in so many different sizes there. It was obvious that an employee had done it. After he was shown the rack, he said that the $9.99 only applied to the exact arm of the rack that is was on. Which makes no sense because unless there is another sign for the other arm you would assume the sign included the whole rack.

So we walked away pretty upset at Macy’s until one of my parents suggested that we ask for a manager. We did and soon enough the manager came down. She was very understanding and had me show her the rack and show that is was in fact very misleading to customers. She ended up giving us the jeans for $9.99 as well as the 20% off discount which made them under $8! I can honestly say that is good customer service there since now I will go back to Macy’s and I won’t be telling everyone how deceiving they are since they fixed the problem.

Also, I have another story happen recently that involves the same thing. I went to Starbucks with two of my friends a few weeks ago. One ordered the new cupcake frappuccino, but she got the cotton candy one. At first we thought maybe it was just the cupcake and it happened to be pink too, but she took it back in and asked. Turns out they had given her the cotton candy one so she ended up getting both for the price of one! It turned out great because I had not ordered anything so I got to drink the cotton candy one since she didn’t like it as much but I liked it more!

If you know me then you know I am not a person who would tend to go out of my way to go and ask about a frappuccino or ask for the manager. But after these incidents I will definitely think twice because it never hurts to ask!

Do you have a story about a time where asking paid off? Let me know in the comments!
xo, Scarlett