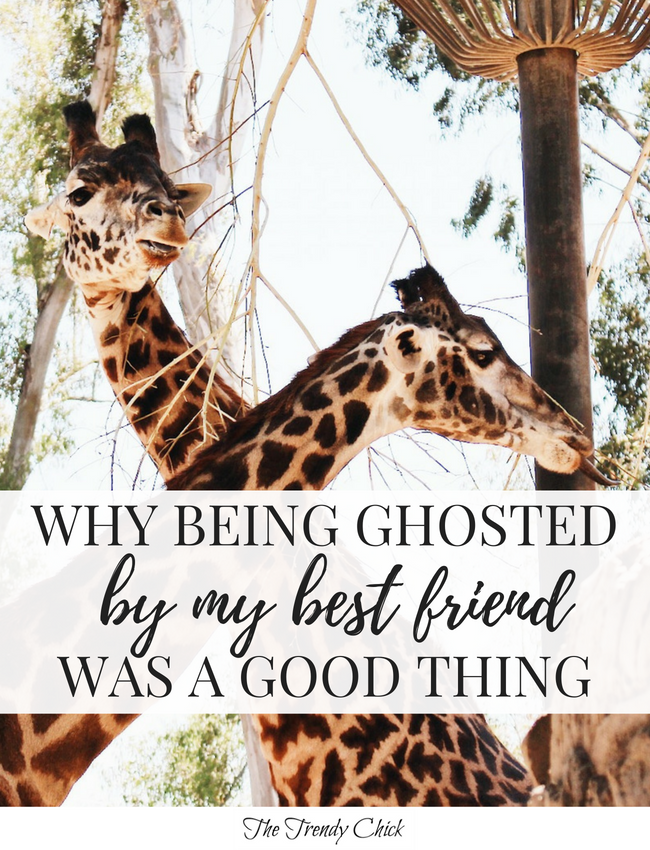 To be honest, before this happened to me, I didn’t realize that ghosting was a thing and that it happens a lot more often than I thought. Obviously not all friendships last, and that is completely okay. Usually there is a reason why, or you just slowly drift apart without any hard feelings. But ghosting is a thing, and today I am here to share my story and why I am thankful looking back that it happened.

And for those of you who are also unaware, this is what ghosting is “the practice of ending a personal relationship with someone by suddenly and without explanation withdrawing from all communication.”

Let’s give a little background information first. I first met Shelby* in 8th grade while we were volunteering together. For some reason, we just clicked and quickly became best friends. During freshman year of high school, Shelby, Grace*, and I became a little trio. We had sleepovers together and hung out together often. Shelby went to a different school than Grace and I, so sometimes we would go a month or two without seeing her. But we always picked up right where we left off, and I always loved that our friendship never suffered because we didn’t see each other every day or even every week.
*pseudonym

Throughout high school, we stayed good friends and hung out often together. Second semester senior year I even joined their small group at their church so we could see each other every week and get even closer. Shelby even came to prom with us at our school senior year as my “date.” Summer came, and although we were sad that Grace and I were moving away to different colleges and Shelby was staying at the college in our hometown, we said we would still keep in touch and stay close. After all, we had gone months in high school without seeing each other in person, and we were only a FaceTime call away.

First semester freshman year came and went. We were all making new friends and having a great time, but we still stayed in touch with each other. I went home in October for a weekend and I saw Shelby for an afternoon while I was home. Then in November I went to visit Grace at her college and we had a great time! In December they both posted Instagram posts wishing me a happy birthday, which shows that they both still thought of me as a close friend since that was what you did for friends at the time. But then Christmas break came and something shifted.

We planned a sleepover together at my house. Then at the last minute Shelby couldn’t come, but then Grace and I saw that she was actually out at the movies with other friends. While that was a red flag, we were best friends, so we gave her the benefit of the doubt and just figured she had planned that first and had forgotten. Then we planned to go to brunch together, and yet again she came up with an excuse. Overall, she blew Grace off about 5 times over her Christmas break, and even lied about when she was going out of town. Which became obvious when Grace happened to run into her in a store in town when she was supposedly already on a trip.

At this point, Grace and I could tell that she didn’t really want to be friends anymore since she didn’t see either one of us while we were back in town for breaks. We were really confused about what had shifted during those two weeks between my birthday and Christmas, and we still do not know.

Spring semester of freshman year came, and we decided not to put effort in, and see if Shelby actually did still want to be friends. And let’s just say we got some mixed signals. She texted us occasionally. We FaceTimed once or twice. I even went shopping with her when I came home for spring break. But during this time she was also unfollowing and blocking me on social media. Which clearly is not normal friend behavior. When I called her out on unfollowing me on Snapchat over spring break, she came up with some excuse that her phone had done it and that was so weird. Um yeah. Right. So she added me back and then unfollowed me again within a few weeks.

Keep in mind, she was also cutting out Grace at the same time. Which is something I am so thankful for. If she had tried to turn Grace and I against each other, it honestly would’ve been 10 times worse. I hate to think that I could’ve lost two of my best friends at the same time.

But when we met up at the restaurant, Shelby acted completely normal and like we were all best friends again. Grace and I were so confused, but just went along with it because we weren’t sure how to ask her when she was being so normal. Then we went to a park, where she showed us her new Polaroid cameras and took two with us. To this day, that is what Grace and I find the most ironic. Why would you waste expensive polaroids on friends that you would never see again? The world will never know.

Before we left the park, I quickly asked if everything was okay. I said that things had seemed a little weird since Christmas break, but were things better now? She reassured me that everything was fine and we were all just busy during the school year. Interesting.

The next day though, when I was still blocked on all social media, I decided to call her out on it. I worded it the nicest way possible and basically said I could tell she didn’t want to be friends anymore by her actions, but was there a reason behind it? I basically said I would accept not being friends anymore but I would just appreciate knowing what happened because Grace and I were honestly clueless. But I never got a text back. And I have not spoken to Shelby since.

First things first, being ghosted DOES suck. Obviously it hurts when you thought you were going to be friends forever and then out of nowhere they completely cut you out of their lives. But, there have been some good things that have come out of it.

Grace and I have become even closer through this. We still talk daily and honestly our friendship is proof that some high school friendships last as long as both sides put in effort. I honestly am not sure if Grace and I would’ve become this close if it hadn’t been for this experience.

I also have learned to be a little more guarded when it comes to friendships. I definitely value my true friends more now because of this, and I can easily see if something is off in one of my friendships now. And I can either address it and fix it, or if it is not one of my close friends I honestly will just stop making an effort to hangout with that friend. I won’t go unfollowing any friends on social media or completely cutting people out, but if I can tell that a friendship is seeming one sided, then I will just let it run it’s course. It is okay to value yourself and your time and to not feel like you have to stay friends with someone if they start treating you badly.

Going along with that, I have learned that you can’t save every friendship. At first, I blamed myself for losing Shelby as a friend. If I had put in more effort and spent more time with her, maybe we would still be friends. But that is such a lie, and it is one that I do not even entertain anymore. She obviously had other things going on in her life that didn’t have to do with Grace and I, and for some reason she just took it out on us and decided to cut us out. Even if you do everything right, some relationships still will end. And that is okay.

Sorry that this post was so long, but I wanted to share the full story and get a little more personal for today’s post! It’s been sitting in my drafts since last fall, but I finally wanted to post it to help anyone else who has lost a friend they thought they would have forever. It happens and life moves on and gets even better! I also want to encourage you to look for the good in every situations, even the ones that are out of your control.