Since I shared Chester’s story on the blog, I had to share  how we got Kiki and Calvin too! Often people only think I have one cat because Chester is the most photogenic out of the group. The other two spend most of their days sleeping burrowed under blankets in my parents bed (Calvin) or my bed (Kiki), and I swear they purposely look the other way when they know I want to take their picture.

For this to make the most sense, read Chester’s story first! This one picks up a few months after we got him.

We had casually mentioned over the summer and early fall that we should maybe get another kitten to keep Chester company. He was constantly messing with Zoe because he was bored, so we thought another kitten might help since it would actually want to play with him. But we never dreamed we would end up with two! 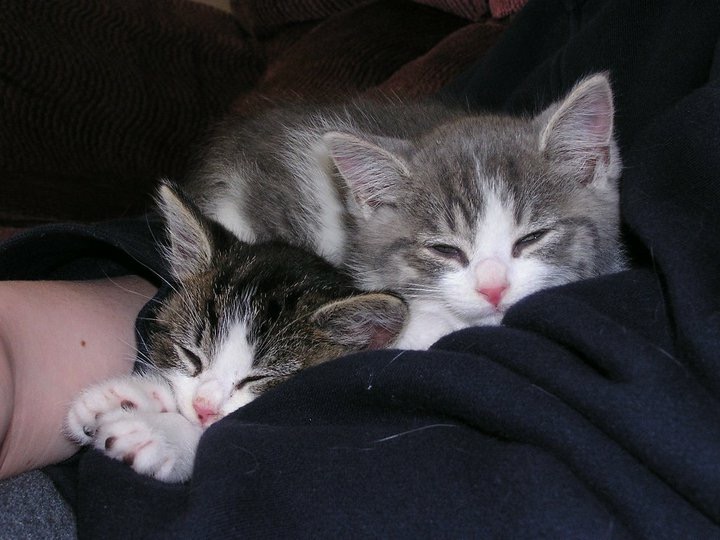 In late October of 2010 (almost 5 months after we got Chester), I was with my mom at her work until about 7 at night. Little did I know, my brother and dad had come home from somewhere to find a mama cat, two kittens, and our neighbors bully cat in our driveway fighting. The neighbors cat scared the mama cat away, and he two kittens ran in opposite directions. They saw one go under a bush right by our garage, but we didn’t know where the other one went. When my mom and I pulled onto our street, I was really confused because I could see my dad and brother with flashlights in our front yard. Then when I found out there was a kitten under our bush and they were looking for the other kitten, I was so excited! Anyone who knows me knows I have always loved cats, so having a kitten literally left in my driveway was a dream come true.

It had been quite a while since the mom left, and we went inside for a bit because we couldn’t find the other kitten and we thought for sure the mama cat would come back for her kitten under the bush. We went back out multiple times to check, and every time the gray and white kitten was still shivering under the bush. It was supposed to drop below freezing that night, so we knew we couldn’t just leave the kitten outside. Finally, we got a blanket and brought her inside to my room. 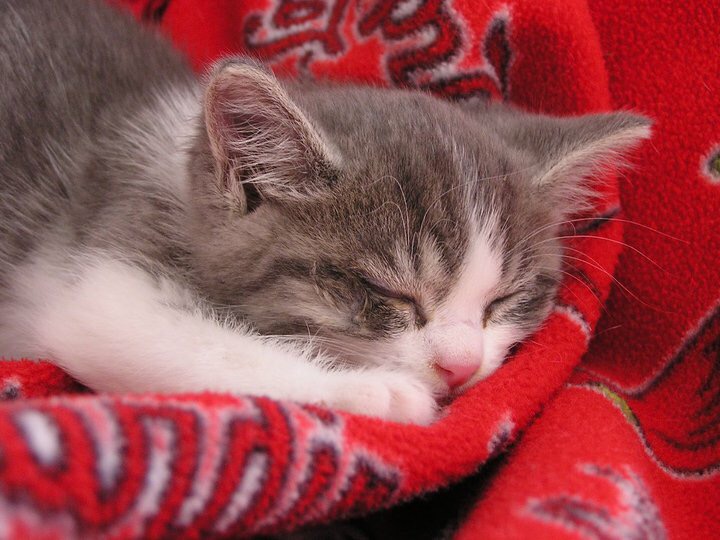 She was tiny and sick, so we decided someone would stay up all night with her. Since my brother and I had the next day off school, we each took a shift. Somehow I got the bad end of that deal, and only got 3 hours of sleep before my 2am shift. But I think Kiki likes me the best now because she knows I was the one who stayed up all night with her. 😉

The next day we called the cat rescue that we had gotten Chester from and the lady who ran it said she could pick the kitten up that afternoon. But they didn’t have any available foster homes, so she asked if we could foster her if they gave us the supplies. It wasn’t like we could say no after I had stayed up all night with her, so we agreed.

That morning my mom had also mentioned she heard a cat meowing outside and it sounded like it was coming from the garage. She went out to look, but then I noticed the neighbor’s bully cat was outside next to our garage, so we just assumed it was her meowing.

I stayed awake with Kiki until mid afternoon that day when my mom came home from work. Then I fell asleep on the couch while watching TV, but she heard meowing again from the garage. So she went outside to look more extensively, and then I woke up to her yelling that she found another kitten behind our trash can in the garage! Nothing wakes me up faster than hearing the words “another kitten” lol! 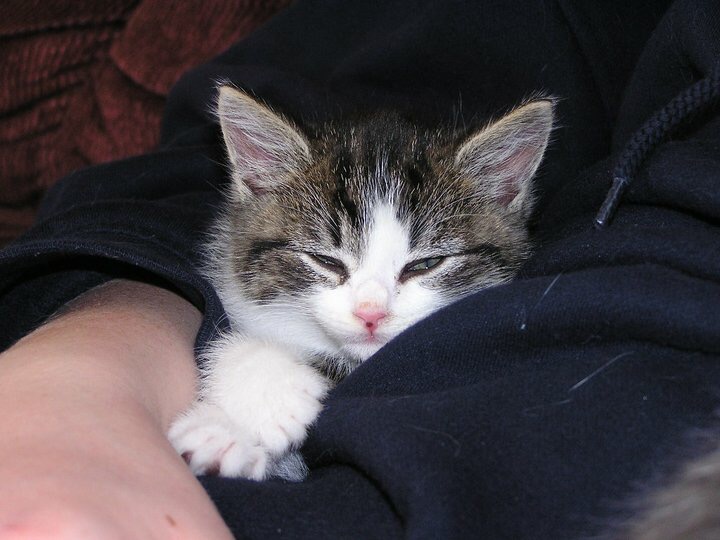 So of course I ran out and she was already calling my dad to tell him. She didn’t want to pick him up at first because she wasn’t sure if he would try to bite her since they were feral cats. But since his sister had been so calm, I picked him up and immediately knew he was calm too. The poor guy had been inside the freezing garage for almost 24 hours by himself! But the thing that sticks with me most  from that afternoon is my dad telling my mom on the phone, “But we can’t have FOUR cats.” Ha.

An hour or two later the lady from the cat rescue came to pick them up and assess them. Either later that night or the next day we were able to go get them again. They were only 4 or 5 weeks old, and we just starting to get off kitten formula and move on to wet kitten food.

By now you can probably guess that we ended up keeping them both and not just fostering them. Kiki immediately latched on to Chester and he became a “mother” to her. To this day she still will follow him around and loves to sleep with him. Meanwhile Calvin latched onto my mom, and follows her around everywhere. 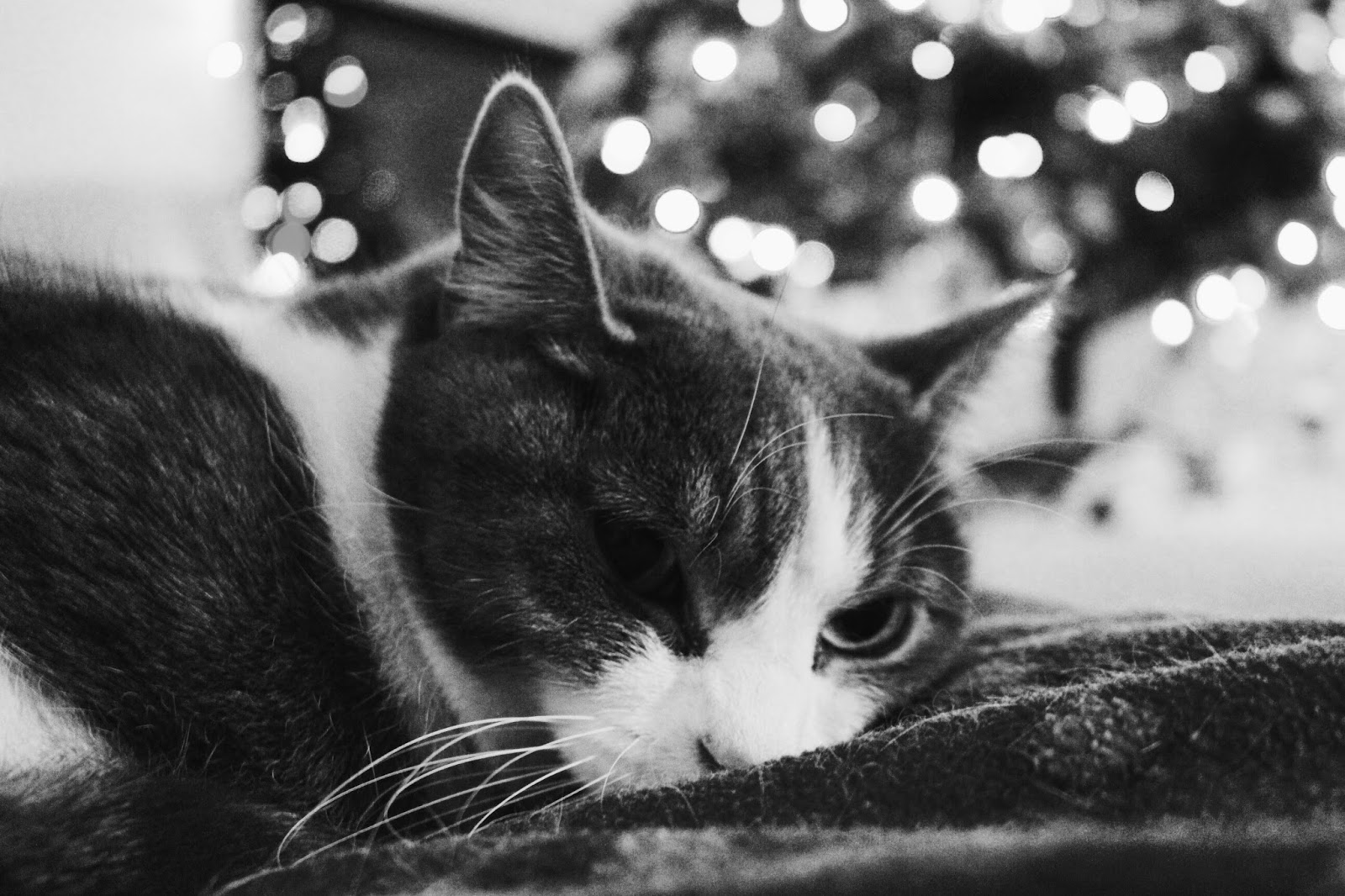 Kiki is definitely my cat, and has always loved me and my room. She would always snub my parents and they never saw how sweet she was in my room. My mom literally suggested getting rid of her my senior year of high school and getting a nicer cat instead. But once I moved to college I think Kiki realized she needed to be nicer to my parents since they were the only ones left. Now they both like her since she comes out and sits with them in the living room in the evenings, but whenever I come home she still likes to sit with me best. Most of the time, at least. 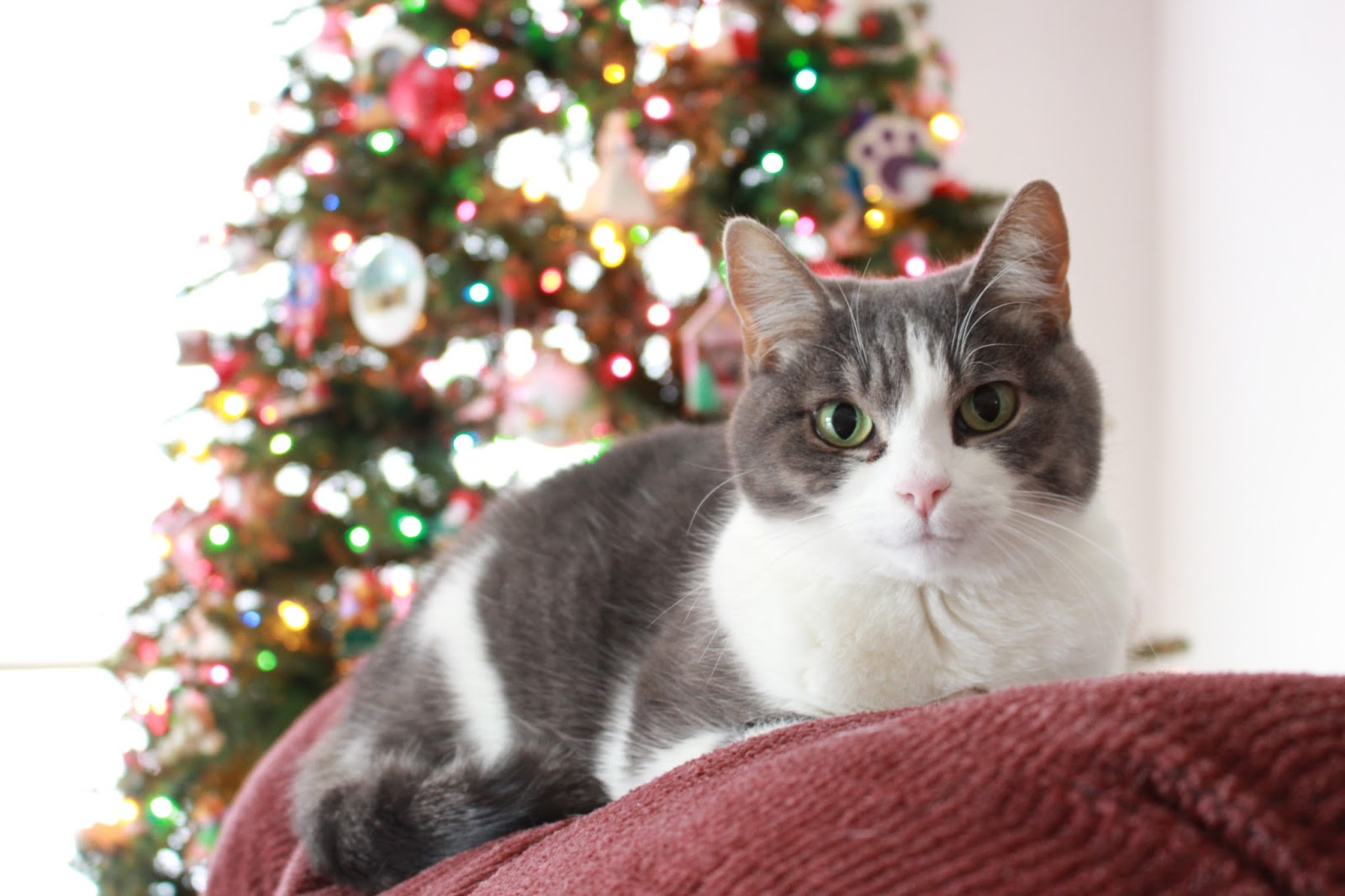 Kiki is also still a tiny cat. It is funny because Chester is so long and lean, but she is just a few pounds and looks so small when she sits by him! 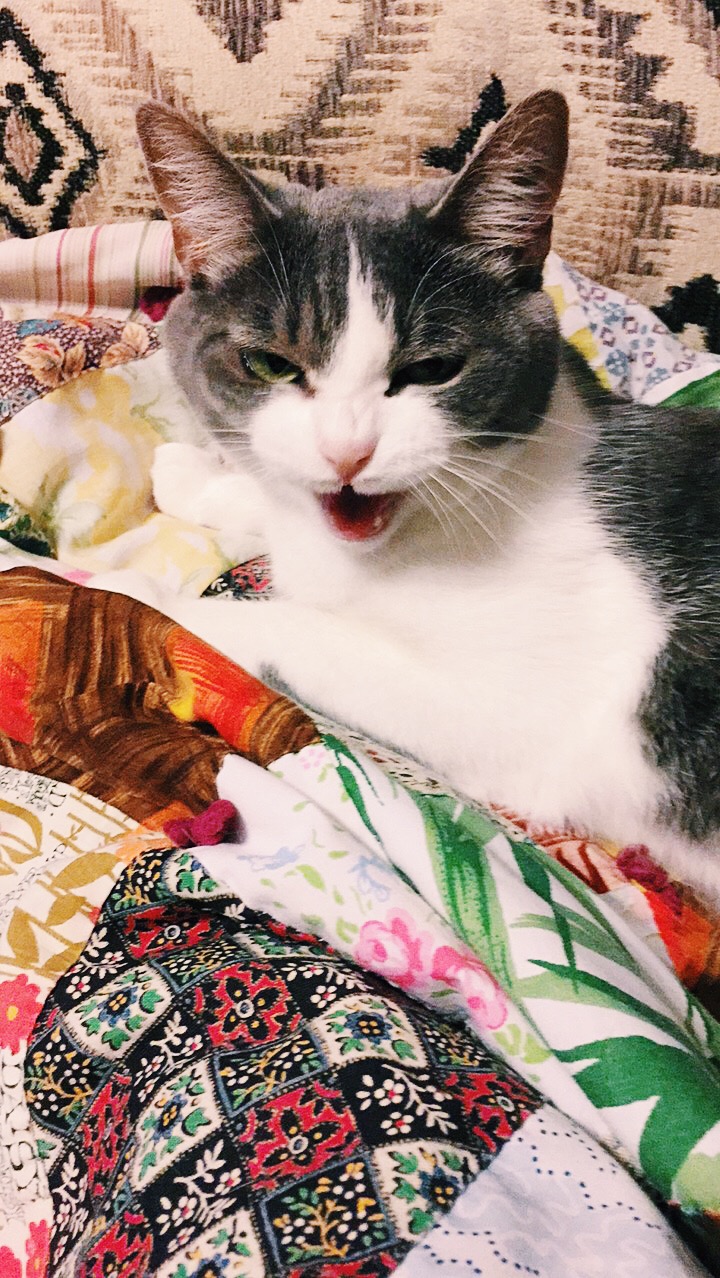 The only trick she knows is that she will meow back to me if I make a kissing noise at her. She has become quite the little vocal cat, as you can see from the picture above. 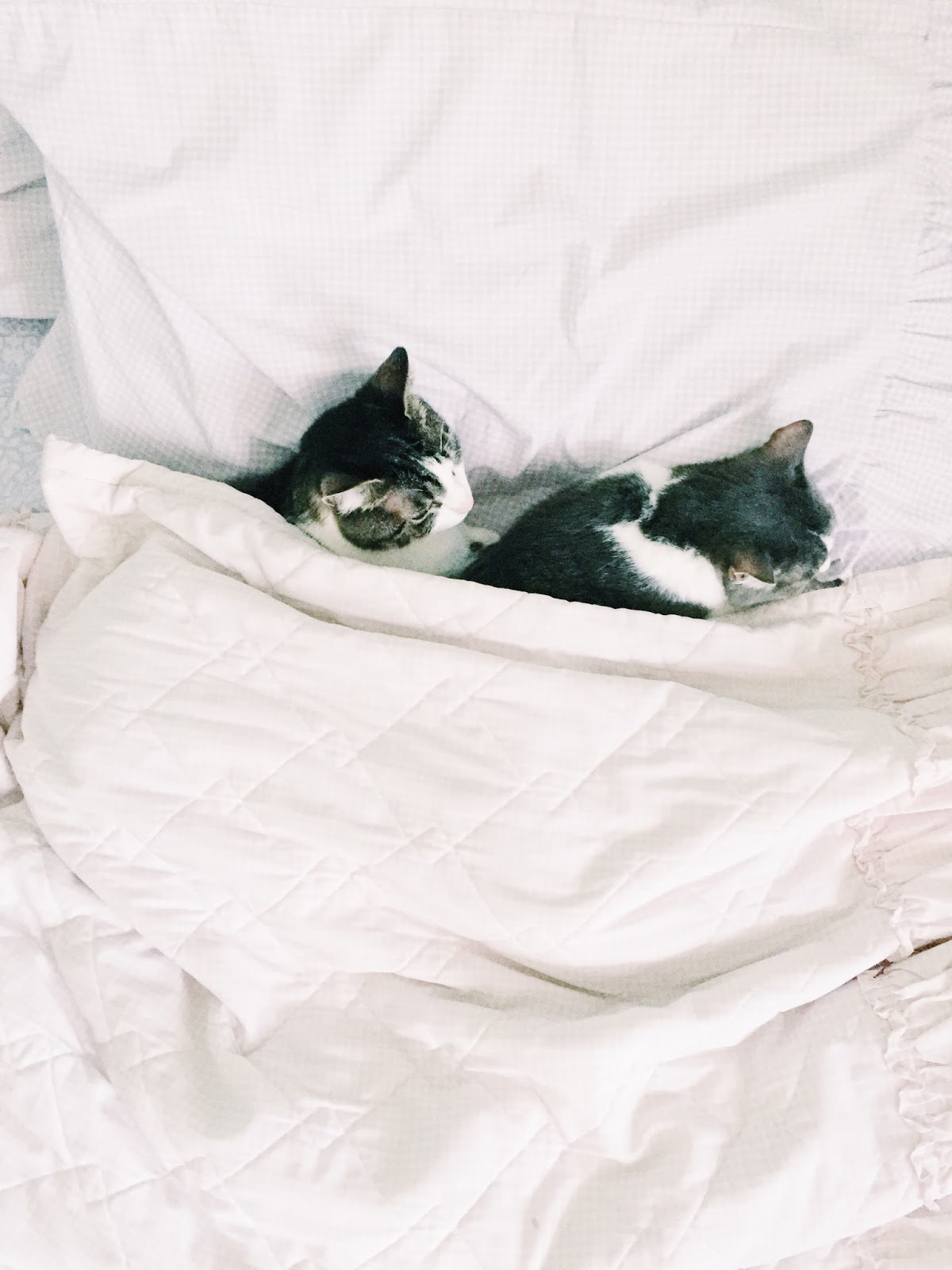 Kiki loves:
-her green monkey blanket
-Chester
-being under 50 blankets
-catnip
-going outside right at dusk when all the bugs are out

Kiki hates:
-Calvin (they can coexist peacefully most days, but rarely choose to be by each other. If he gets too close, she will hiss and let him know).
-anyone besides our immediate family
-human food (unlike Chester, she refuses to taste anything that comes from the table)
-the vacuum
-getting her claws trimmed 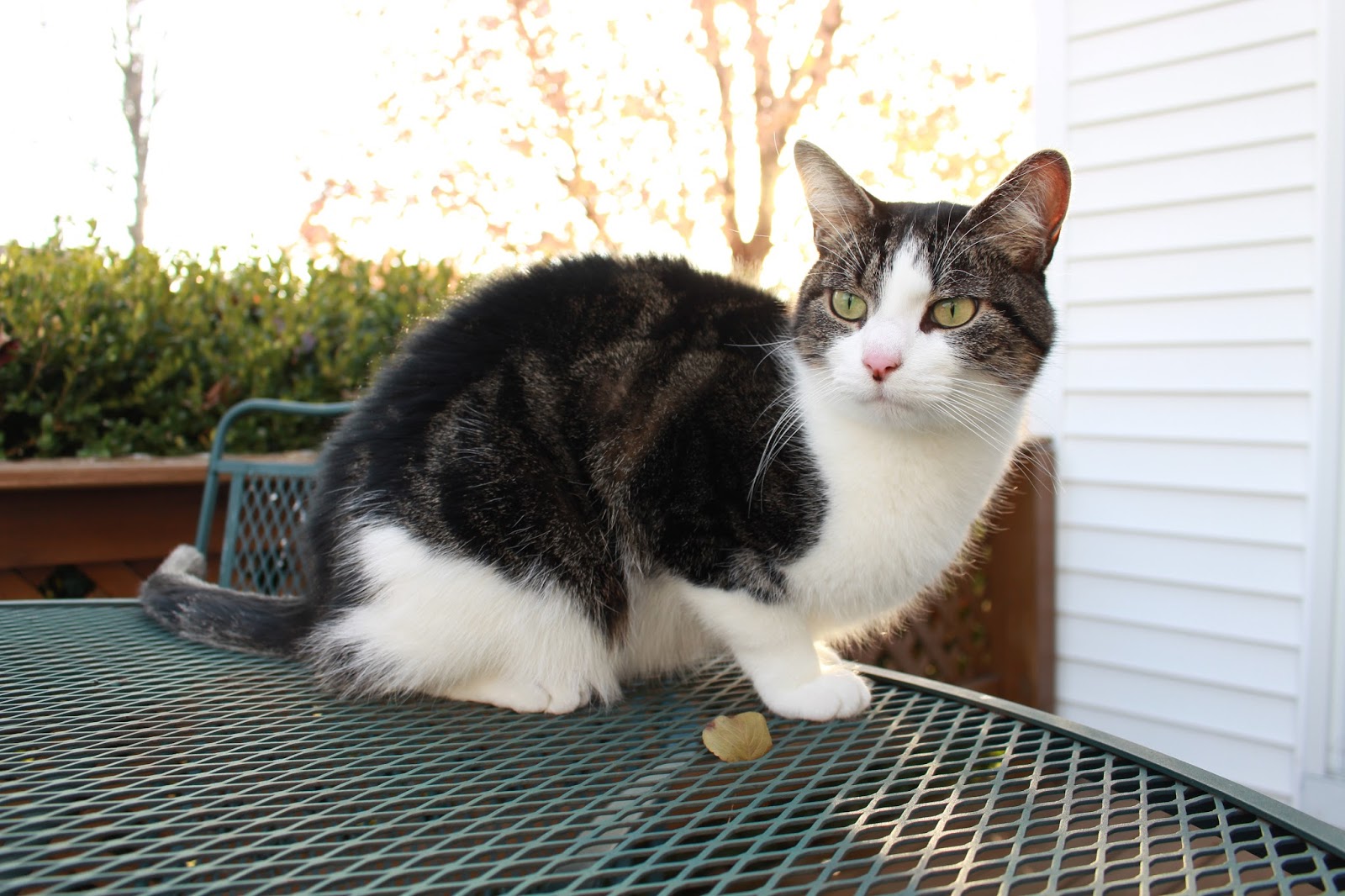 Now for a little bit about Calvin aka Kevin (a few years ago I started calling him Kevin when he was being dumb and now it has just kind of stuck).

He is such a mama’s boy. He will be so sweet to me if I am home during the day while my mom is at work. He willingly sits with me and purrs happily. But the second my mom comes home and sits down, he runs over to her and completely forgets anyone else. But I can’t really complain since I usually have Kiki or Chester too.

He is still the most calm out of all of them. I have only heard him hiss once or twice and he only play bites and never bites too hard. Unlike Chester, who has been known to accidentally draw blood before…

He does get a little protective and growl if he sees someone outside the window on the sidewalk, but it is all just an act since he is the biggest wimp of them all! If someone is outside and takes one step towards our house, he is running away to hide before they can even reach the door! 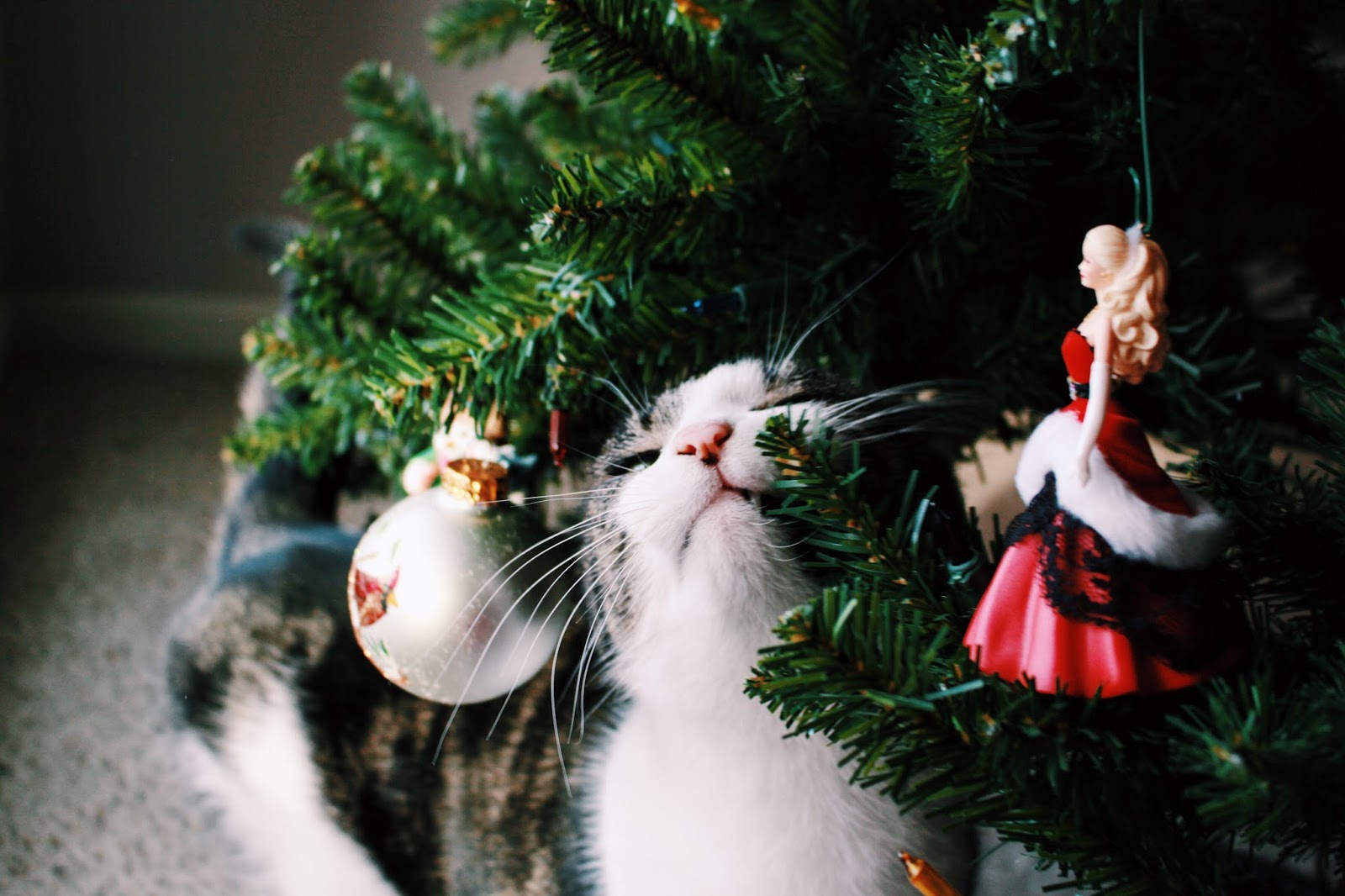 Calvin loves:
-eating the Christmas tree
-a warm lap
-the fireplace
-burrowing under 50 blankets
-my mom 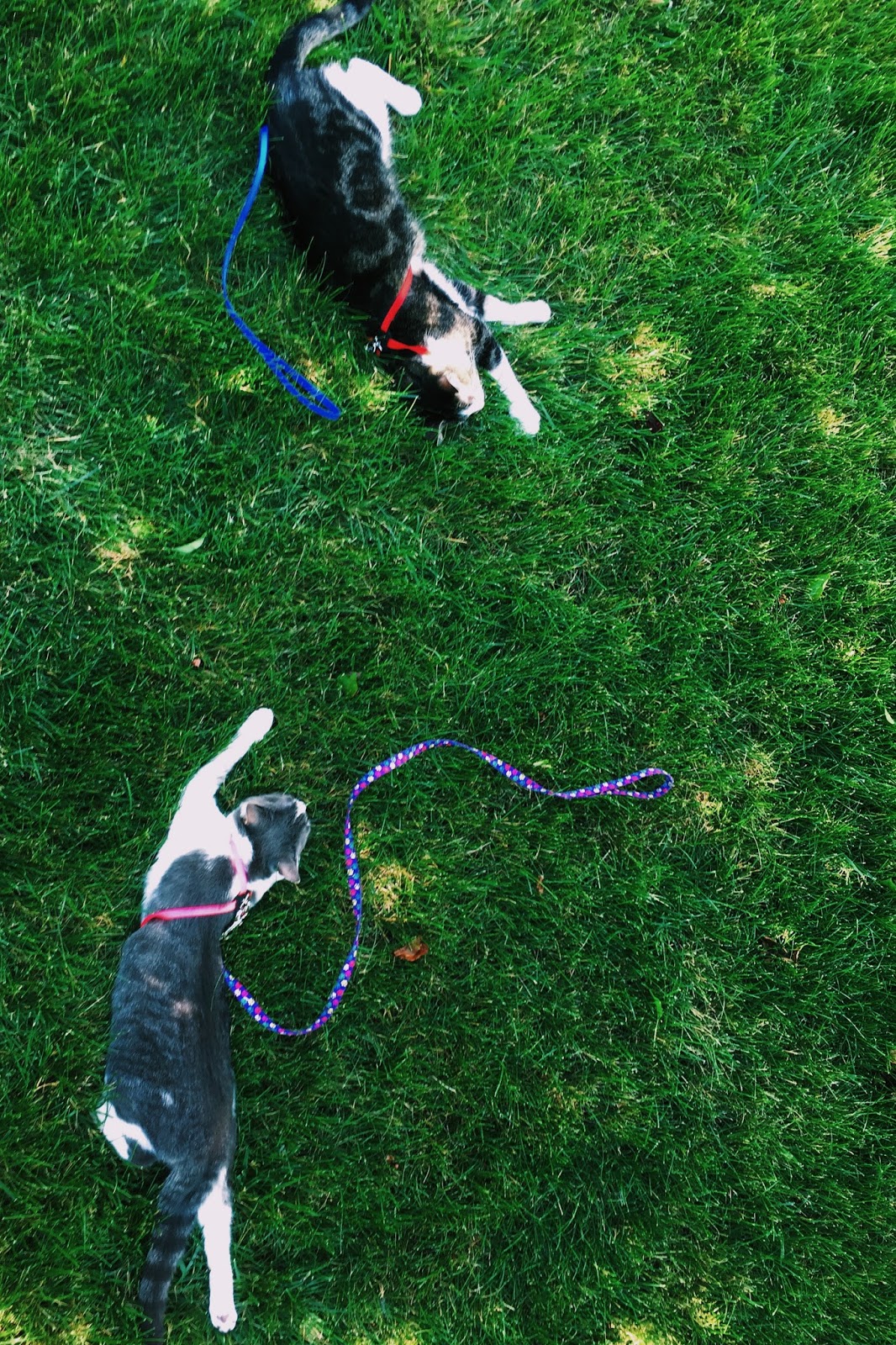 Overall these two were just what we needed. Chester really did do well once these two came into his life and he left Zoe alone for the most part and just played with them instead. And of course they are just so cute! 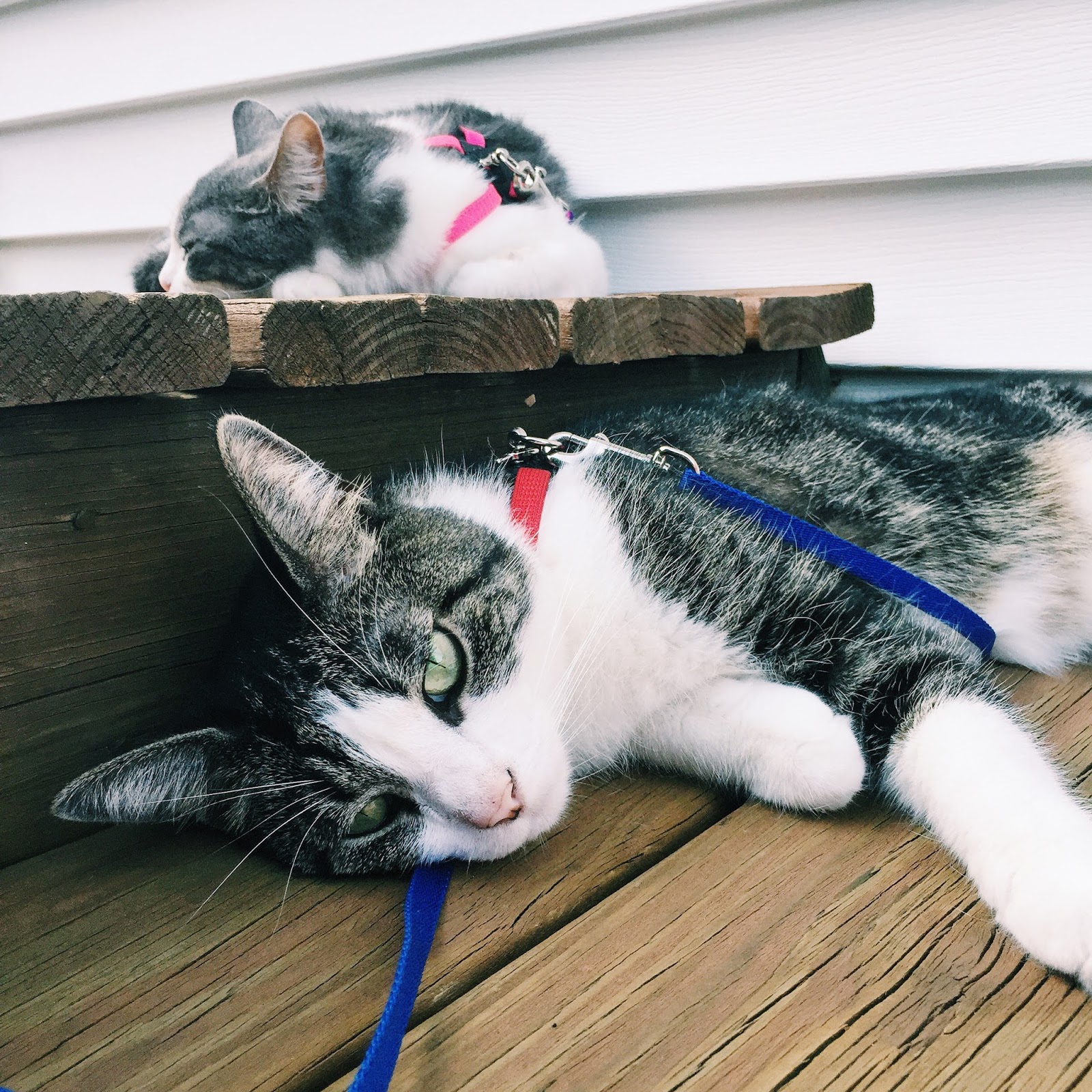 Do you have any cats? Share about them in the comments!
xo, Scarlett